skip to main | skip to sidebar

Festivus, for the rest of us!

Merry belated Festivus, from the ponies and their kitties!

Commence the airing of grievances!
Posted by 'stina at 12:38 PM No comments:
Labels: Christina, festivus

Clean Up on Aisle Tuesday: Jenny Lewis' cloud is lined with bullshit

Jenny Lewis once again topped the charts of StereoGum's Gummy awards in the Indie Rock Crushes category and I am right behind her on the "talentless hack" chart. 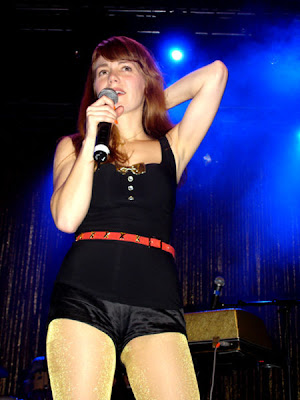 Zooey Deschanel took number one, thank you Satan, she actually has a beautiful voice and is legitimately hot. I'll be a little too honest right now, the first time I heard She & Him's "You Really Got a Hold on Me" nearly made my eyes sprinkle and it has definitely found its way onto my romantic weekend playlist, so Deschanel is totes deserving of numero uno in my mind. 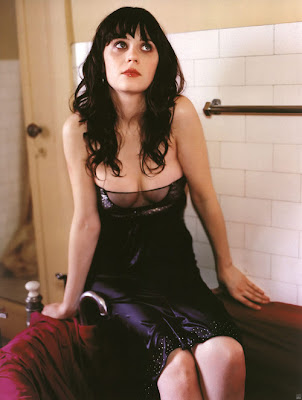 However, Lewis kept second this year and I am FURIOUS. To add insult to injury, I was already mad that Captain Ginger Wonkeye (Thom Yorke), the guy that looks like he is 12 from that boat shoe band (Vampire Weekend), Skeletor from Deerhunter (Bradford Cox) and Ryan Adams and his heroin problem beat out Spencer Krug on the dude's list so a big thanks to the parade of idiot voters for rubbing some Rilo Kiley salt (the ouchiest kind) in that wound.

I am going to face some serious social backlash for talking shit on Jenny Lewis, but I don't care because you can't pull the child actor wool over my eyes. Why am I so FURIOUS? There is nothing especially unique about Lewis' music or voice that warrants any sort of list-topping fuckery. She has that spun-sugar default indie-rock girl mewl and lyrics that don't really speak to me other than on how to end up fucking a guy you've been trying to not fuck:

"I keep on talkin' trash but I never say anything
And the talkin' leads to touchin'
and the touchin' leads to sex
and then there is no mystery left."

To me, being an Indie Rock Hottie means having a relatively impressive body of work AS WELL as having a relatively impressive body. At the end of the day, Lewis is generic, bland and overrated.
This song (Silver Lining) comes on the XM at work and Jenni thought it was Jewel until I set the record straight. The video for this song features Lewis and her poor piano posture (bend your fingers, not your wrists, helloooooo. Have fun getting carpal tunnel!): 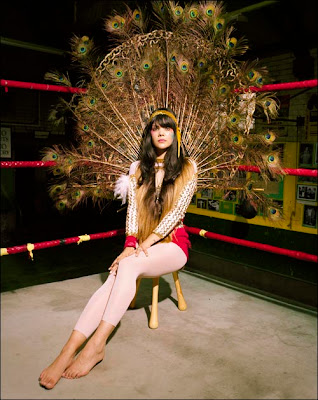 who is a total fucking badass (bitch she play autoharp like us) and is much more deserving of a spot on the list, but also featured Joanna Newsom: 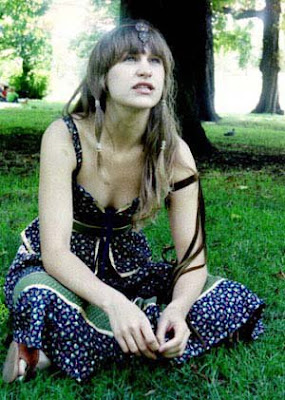 who can take her Christian Louboutins and hippie bullshit and kiss my black ass. You win some, you lose some. This shit is either way rigged, or people are just incomprehensibly fucking stupid. I mean, come on, Sigur Ros got 8th in Best Live Act, which tells me the Stereogum voting crowd is into mediocrity and napping. Moral of the story is, watch your votes because you might piss me off.

Still a hair away from corybantic about us not even getting an honorable mention for best music blog,


Posted by 'stina at 1:40 AM 6 comments:
Labels: Christina, clean up on aisle tuesday, rilo kiley

Us Ponies are proud to announce our dear friend Paul Petersen (of the Mistits) is taking over FM 94.9 at 8 a.m. Saturday! Go forth and listen, for it may be the only time you will ever hear Jawbreaker on the radio, until I win a Coup d'Etat.

Still really sick. Can't think of anything to hate. Sorry, guys. Autolux has a new song up though!

Clean Up on Aidle Tuesday: Amanda Palmer and her Nazi puppets

Yeah, it's Thursday, I'm aware. I've been Bukowski-ing pretty hard as of late, sans the writing. So basically what I'm getting at is I've been drunk for easily two weeks straight if not more.

I was having a hard time thinking about what I hate this week (completely out of character, I know) but Jezebel did it for me. Unfortunately, Roadrunner Records fucked up really hard and it unfortunately reminded me of how much I don't like Amanda Palmer/The Dresden Dolls. Palmer made a video for a song off her solo album called "Leeds United:"

And what did Roadrunner do? They told her to cut a few shots from the video 'cause you could see her stomach and shit. Well you know what Roadrunner? Tell Slipknot to go on a diet too. Or at least tell them to stop sucking so much ass.

As much as that's a bummer, I still don't like Amanda Palmer.

2.) I don't care for the weird gothy carnie schtick:

3.) Her eyebrows freak me out: 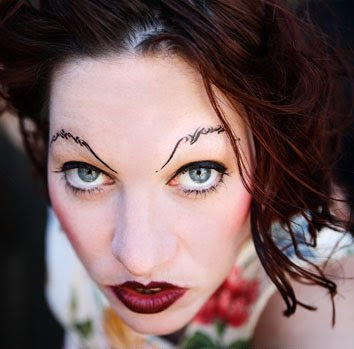 I have a lot of friends that really love the Dresden Dolls and I just don't get it. Her voice is sounding more and more gravely as of late, kind of like she's been sucking a sandpapered dick for the last couple of years, and the "angry girl with a piano" thing is getting really old. Especially because Palmer blogged about being embarrassed to admit to liking Tori Amos, the original weird angry girl with a piano. Get with the program, dude.

See you on A&E's "Intervention" soon,

are you there vodka? it's me, megan

It's good to be back and I've got a real nice treat for y'all, a Horse Feathers video!

"Curs In The Weeds"

Why yes, that was Joe Haege from 31 Knots.
Unfortunately, it's a long, hard slog to the end of fall quarter and I must get back to the 18th century.

No Clean-Up on Aisle Tuesday, I'm up to my ass in alligators. When I say that I mean I have too much damn homework.

Tried to get Dirty last night, failed, for the first time ever. I hate waiting in line and I especially hate waiting for in line to get my overpriced drink jostled by some asshole that is going to ask if they can try on my glasses. After an hour, I'd rather not go in at all. Don't get me wrong, I'm not above waiting in line, but like Kim from the Real Housewives of Atlanta says, "I'm too old to do shit I don't wanna do."

Good news is, Thee More Shallows put some new songs up. The real kicker? They're good.

What else is going on this weekend?

Deerhunter is playing at Le Chateau Casbah on Friday, Lanterns are playing at The Che Cafe Saturday, some other stuff I am too lazy to look up.